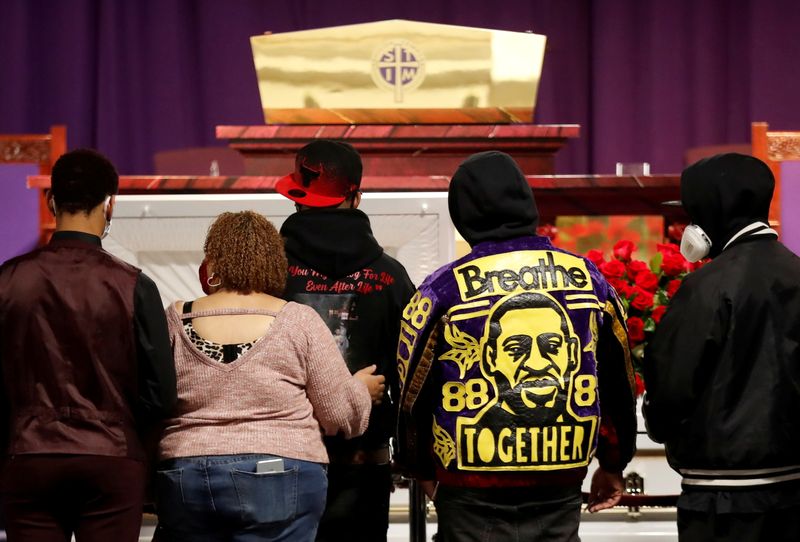 MINNEAPOLIS (Reuters) – Mourners gathered at a Minneapolis church on Wednesday to view the body of Daunte Wright, the 20-year-old Black man whose fatal shooting by a police officer in a nearby suburb set off protests that coincided with the trial over the death of George Floyd.

The viewing comes as activists against police violence celebrate the guilty verdict given on Tuesday to Derek Chauvin, the white former Minneapolis police officer charged with murdering Floyd. But Wright’s death in the middle of the three-week trial has dampened the mood.

Wright, who was shot on April 11 in Brooklyn Center, Minnesota, lay in a white, open casket covered in red roses, with a large screen behind him showing videos and pictures of his family and friends. He was survived by a two-year-old son.

“It’s horrible. I feel sadness. I feel like my heart was tore out of my chest,” his aunt, Kristie Bryant, said after viewing his casket at the Shiloh Temple International Ministries, the same church where his funeral will be held on Thursday.

“I was really close to him when he was young,” said Bryant, a 39-year-old resident of nearby St. Paul. “He loved basketball. He loved his son with all of his heart.”

The shooting of Wright set off more than a week of demonstrations outside the Brooklyn Center police headquarters that turned violent at times, with some protesters hurling objects and the police using tear gas and less-lethal rounds.

Kimberly Potter, who resigned from the police department after the incident, has been charged with second-degree manslaughter. Potter has not entered a plea and her lawyer, Earl Gray, has not commented about the case.

Police video of the shooting shows Potter threatening to stun Wright with her Taser before firing her handgun. She can be heard saying she shot him a few moments later. Former Police Chief Tim Gannon, who also resigned, said Potter mistakenly used her gun instead of her Taser.

This Lemon Ricotta Poundcake Is Perfect for Weekends at Home